We Are Ego Thieves… Not Pirates!

Ok, as of this moment in time, at 2pm on Friday 11th September 2009. You cannot download any of our exclusive in house mixes. Why? Well according to Servage Hosting (who just hosts our download as we have had this server for a good while now, but they do NOT host Ego Thieves website) they where sent a DMCA as far as we know on 2009-09-10 17:10:48 GMT by Websheriff.com on behalf of MINISTRY OF SOUND (incl. HED KANDI / HARD2BEAT / GLOBAL UNDERGROUND / KISS).

Firstly i would like to thank our member kingoftherastas for notifying us that the mixes were down. This came at a bit of a shock as we use private hosting so you can all download our mixes fast and free (well at our expense of course!).  When i checked our FTP, our whole Ego Thieves folder was missing? Lets just say i was not best pleased…! Im the only person who has any access to this FTP bar Servage themselves. Now Servage to be fair haven’t been too bad in the past, hosting is a bit crap hence we use it host our mixes and a few test sites when i do my development but that’s it. Now according to those lovely folks at Servage their support is the best and ”Our average response time is 20 minutes.”  Well isn’t that a crock.

I put in a support ticket at 1.03am and waited over two hours before i sent a follow up, still nothing! Then when i awoke this morning i saw a reply from Nick at 6.28am. Now it may just be me of course, and i know im Cypriot and Turks are renowned for being late, but even as a Turkish 20mins… that’s taking the piss. All they said was to check my admin messages (which by the way you have no idea you even have as they dont email or anything!). When i did i was actually in utter :O face to what i saw, and i quote: 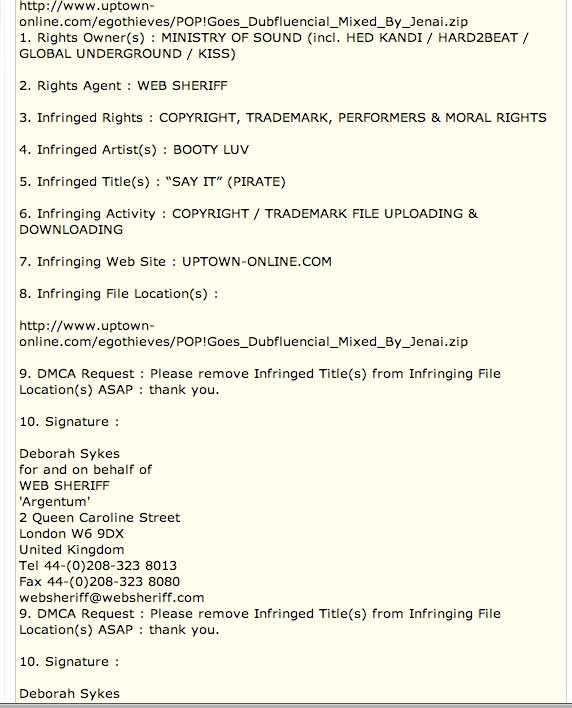 Now for those who don’t know what a DMCA is, its basically a law that allows companies to contact your hosting direct and ask for removal of copyrighted work. That’s fair enough, even if the law is very much in a grey area and contradicts itself many times over but that’s a whole other post. But we support the removal of illegal content online yadda yadds. But what Ministry Of Sound are saying is that as a DJ i cannot produce a mix that i host with my own money on my own server for a track i have paid for (or some cases been given as a promotional track). We do not make ANY money, i repeat ANY money off our mixes. We do not have advertising on the covers, we don’t charge for the mixes or make any profit at all. The mixes are purely for promotional use as our disclaimer says so on our sidebar. We do not condone posting up illegal tracks and have never done so. Nor have we once received a complaint from any DJ, Producer, Artist or label. In-fact its been the exact opposite!

We have had untold emails, phone calls, texts and just pure love shown from masses of producers and artists thanking us for including them on our mixes and how much they love our mixes and what we do. Including some Ministry Of Sound producers!! Its an absolute farce that Ministry have employed and paid for another company to have a track on a free DJ promotional mix removed from their site. Its also nonsense that Servage hosting did not inform us and instead of just removing that mix, they obviously got intimidated and removed the whole folder with all our mixes in again without notification. Its as many would say a straight ‘Par’.

So what does this mean for music? Are Ministry Of Sound now going to hit every DJ mix with one of their tracks on it for removal from the Internet? What about all those pirate stations? Or even the down-loadable shows of pirate shows? Or the DJs who pay hard working money for tracks on their label? Are we no longer allowed to play or promote any of those tracks without written permission from Ministry themselves? What about the millions of podcats? Youtube videos? DJ mixes? Cds? Are MOS going to start emailing people to remove tracks off their iPods?

We are not in the business of pirating any form of music as music is very much our business. When we make a mix we try to post and link to every artist and producers page, we message or email them letting them know we have put their track on the mix and make sure we let people know what music we love and support. All this action has done is made Ministry Of Sound look stupid. Already had tones of support from fans and established producers alike telling us what bullshit it is and how they (MOS) need to ‘fix up their act’.

We are one of the only blogs around who produce high quality, consistent mix series online with full artwork and positive promotion for everyone we feature. We have had nothing but amazing feedback on what we do and our fan base as well over 100k downloads and 2000 page-views a day says it all. Many have suggested MOS are ‘hating’ on us. This may very well be the case. I personally think its ignorance and lack of research and knowledge and are quick to tarnish us with a piracy brush, when in-fact they couldn’t be any further from the truth.

I will be informing MOS of how weak and futile this move was and i know for a fact they could of easily contacted us themselves to let us know how they feel. Either way you have wasted your money and time. You have not ‘won’ anything or taken down some huge piracy website and definitely not made your selves look like ‘The Man’. You have made yourselves look immature, small minded and completely idiotic by hiring a company to take down a free, non commercial, promotional mix by a DJ trying to expose new music to the masses. I suggest you hang your heads in shame while Ego Thieves sing very loudly that there is ‘No Pain In This Dojo’ :).

Now with the recent massacre of shootings and people having their heads decapitated outside of their club due to drug dealers having wars about whos going to sell drugs in their club and innocent clubbers getting injured, shot and nearly killed. You would of thought they would have allot more worrying matters to attend to?

The mixes will be up again soon, even though i don’t feel i have to i actually want to remove that Nero remix myself from the mix as i want to no longer support MOS label until they man up and contact us themselves instead of cower behind a company called Web Sheriff…..lol i mean whats that? Sounds like its a job for…. 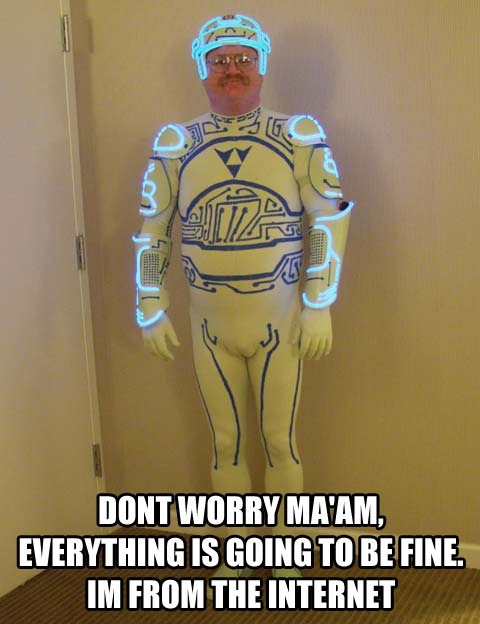